After completing Pick Up the Gun, My Son in 2008, I was left with the desire to continue creating something just as personally meaningful. The nonfiction style narrative, which I had used, told the story of a mid-20th century Appalachian woman and victim of child molestation, who wrote stories for print and film as a therapy for her own psychological recovery. The idea of getting to know a character by what they create in their minds and/or materialize had been something I had unconsciously tinkered with years earlier, on a couple of other stories.

Months after Pick Up’s completion, a viewing of The Mindscape of Alan Moore (2003), followed by listening to Alex Grey’s intentions in CoSM: The Movie (2006), a new idea was ignited. One that led me back to revisiting comparative mythologies.

The first truly encouraging read was Joseph Campbell’s Myths of Light: Eastern Metaphors of the Eternal, which included a creation myth taken from the beginning of the Brihadaranyaka Upanishad (found on page 9) that inspired further research.

The initial picture that launched the enormous in scope, yet small in word count project, actually came to me by way of the DVD commentary tracks (added to the images) on The Films of Kenneth Anger. Thinking objectively—having heard the story many times before—I toyed with the idea: “Why would a deity need a bringer of light, unless it was in the dark?” (See Sufi poet Mansur al-Hallaj, author of the Kitab al Tawasin, for his interpretation on the story of Iblis.)

And so, my mythological adventure project started rolling. It’s a story completely devoid of any attachment to other myths and religious stories. In fact, once the idea for the image illustrated above came to me, I decided to leave my research into mythology behind in exchange for other subjects and new sources of inspiration.

After watching Walt Disney’s Our Friend the Atom (1957), the very first book I read was The Manga Guide to Molecular Biology by Masaharu Takemura and Sakura. Since then I’ve developed a new appreciation for mathematics, which I never had before, and have fallen in love with astronomy, physics, and especially particle physics. (I’ve just been so darn busy lately that I’ve got a handful of books still waiting to be read.)

The purpose for my having started up My Kind of Story was to get organized, and get things done—in particularly, for this project. Why We Became You will continue to be previewed as long as I have a collaborator to deliver its visual half. The complete accompanying text will go up, once the last picture is completed and compiled with the rest. This one is quite a ride.

Special thanks to Anger, and to The Vogues for singing Jimmy Duncan’s My Special Angel.

AUG-27/OCT-21 update: I’m currently keeping my eyes peeled for a new artist, so the project has been placed on hold. In the meantime, I’ve playfully revealed a few more details in I Am a Rock’s penultimate scene. 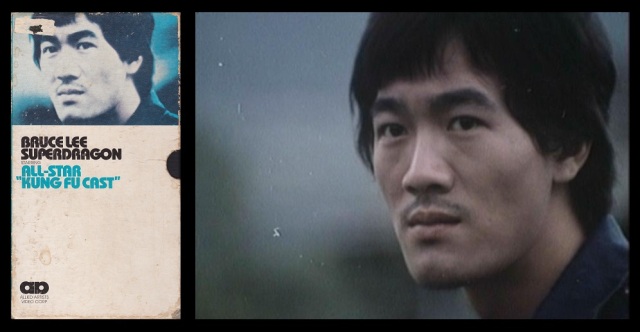 Bruce Lee Superdragon (1975) was one of two factory-made VHS tapes which my brother and I inherited from our dad’s small movie collection—the other one being Summertime Killer (1973). Unlike its DVD incarnations (such as GoodTimes’ The Young Bruce Lee), the original U.S. home video release by Allied Artists in 1976 was distributor Dick Randall’s cut. Entire scenes of the production’s not-particularly-interesting drama were replaced with action-packed sequences taken from three other films, and passed off as if Bruce Lee had directed them.

Directed by Ling Ping, and featuring an excellent rendition of Johnny Pate’s Shaft in Africa (Addis) as its main theme, this videotape presentation provides plenty of cheap thrills with some memorable dialogue. As with the rest of the Bruce Lee exploitation subgenre (including such guilty pleasures as Exit the Dragon, Enter the Tiger, Fist of Fury II, The Real Bruce Lee and Bruce Lee: The Man, the Myth), its target audience is not / should not be there for anything resembling a biography. You’re there for the action. The best of which Superdragon has to offer actually derives from two of the films spliced in.

The most commonly known and DVD-accessible is King of Boxers (1973), a.k.a. The Screaming Tiger (click the title to see a trailer), a.k.a. Ten Fingers of Steel, which features genre superstar Jimmy Wang Yu. But the reason I took such good care of this video, purchased a secondhand copy, and had it recorded it onto a DVD-R, was not simply for nostalgia. As truly terrific as the Jimmy Wang Yu sequence is, the other film has a particular combination of sounds, music, and images, which to this day has retained a unique quality of enchantment upon me. And yet, having checked with several, genre-related movie forums, I still don’t know its title.

Throughout the years, I’ve even had a few characters in two of my stories search for it. (I might as well amuse myself while questing.) As a minor subplot in I Am a Rock, a half-Cherokee Tennessean has his girlfriend and her cousin trying to track it down for him in Miami, where she’s visiting. Since revising the second act for sharing purposes has taken longer than I anticipated, and being that I have yet to locate the film for myself, I thought I’d try my inquiry anew starting here and on Youtube (check it out below).

Bruce Lee (directing; lowering his sunglasses): One more time, Billy. (to an assistant) Go tell that make-up girl I don’t want blood all over his face.

Here are some details. The film’s protagonist slays the last of the villain’s henchmen, adding to a pile of bodies lying about in a courtyard. The bad guy first hurls a door at him, before literally flying over to attack. While the hero has a sword, his antagonist is armed with some kind of exotic weapon: a steel rod with a heavy sphere at the end, which opens and divides itself into eight sharp-lobed blades. Despite this, both men appear equally tough and able, while the villain has the advantage of being fresh for battle. Neither exchanges a single word to the other, as the good guy’s female companion looks on. She’s waiting for someone to bring a special weapon.

Elsewhere, a young woman attempts to steal a unique, power-wielding sword from another gang’s lair. When the gang shows up, a fight naturally ensues. And it’s intercut with its predecessor, until her wounded male “cousin” (in the English dubbed version) climbs over a wall and gives her a hand.

In the meanwhile, the leading hero’s companion receives injuries by a sword thrown at her, followed by a severe blow to the body, as she tries to help him. He’s nearly worn out, and the bad guy is taking full advantage of it.

Fortunately for the good guys, the other woman arrives. When she announces that she’s brought “the sword” with her in its sheath, it alarms the villain. And he does everything he can to keep it from being put to use against him.

But when the sword is removed from its casing by the young woman, both it and the hero’s sword hurtle out of their grasps, as they are somehow magnetically drawn towards the villain. Skewered and doomed, he tries to go after her. So the hero picks up the bad guy’s fancy weapon and whacks him with it. Falling to the ground and groaning, the good guys stand by and watch him, as they wait for him to die.

The music is remarkable. The drums and brass section are paced and dropped accordingly with the tension. Also, the choreography throughout is stylistically appealing—it’s quite good for the period, and treated without humor. The editing uses slow-motion very briefly, but effectively.

The formula is pretty standard, but its execution and handling is distinct. While there are many other fine examples in its genre, it’s a pity that this film remains elusive and relatively unknown.

Any information on the title of this film and/or where I can obtain a copy, would be greatly appreciated. Hopefully, the rest of the picture lives up to its climax. Regardless, this nearly 7-minute sequence alone is worth recommending. My muse loves it too.

OCT-22 update: Special thanks to KnightDarkest in the UK for providing me with the title information to Wong Tin-Lam’s The Chase (1971), a.k.a. Slash: The Blade of Death (be sure to click the title to see a trailer), a.k.a. The Shanghai Killers. The lead actor’s name—and the who of this post’s title—is James Tien.

An English dubbed, full screen copy is available to view and/or download at stagevu.com.

The King of Boxers clip, as was inserted into Superdragon, is also now available to watch on Youtube.

And Freddy Burtis
got his movie.