It was August of ’01. My closest friend, whom I regard as my film teacher, and I were waiting to be seated upstairs at the original Alamo Drafthouse Cinema in Austin for QT5, where he struck up a conversation with then-regular patron and later programmer Lars Nilsen. It didn’t take more than a minute to realize that Lars was the most knowledgeable person in line with us. So, before the conversation ended, I asked him if there were any rare video outlets he’d recommend checking out. And shortly upon arriving back in Miami, I received a mail-order catalog from (the now defunct) Shocking Videos. As I browsed through the categories, I found myself either smiling or laughing aloud while reading owner Mark Johnston’s title descriptions and summaries. It was a hundred-page booklet packed with entertaining entries, some even good enough to read twice. And it remains one of my favorite reference guides to obscure cinema that still tickles my imagination.

While Shocking Videos hadn’t been the only name Lars had provided us with, Mark Johnston’s collection of hard-to-find titles was the most extensive and the best advertised. He had movies from all over the world, ranging from “trash” and exploitation to some truly nasty-sounding smut. And a few of the really good ones have only recently begun seeing the light of day, thanks to an expansion of boutique labels and studio vault on-demand titles. Although, with a larger degree of exposure given to the ones licensed by the bigger companies, a lot of the sometimes better or equally valuable films fail to gain awareness (you may wish to visit the Criterion Dungeon to browse through several online catalogs). But besides Shocking Videos’ enormous library, it had something else going for it that I’ve yet to find the likes of, even amongst the most popular and resourceful film and DVD websites (such as Gary Tooze’s DVD Beaver). Shocking Videos had Mark. In fact, Shocking Videos was Mark. And Mark was well known and held in high esteem amongst collectors for both his selection and fine prints, and rightfully so. But for me, in addition to these things, his knowledge of movies combined with his unapologetic sense of humor and the way he sold them to you, set him apart from everyone else. Even his email newsletters and special offers would crack me up.

In 2005, upon having successfully cranked out a screen treatment based upon a few daydreams I had had with two supporting characters from an old project, I thought about doing a few short exercises to jolt my imagination, and shake it clear of that one story I had been chasing for years. I wanted to just do something fun. So having used a formula where I envisioned myself writing for a particular actor and director (Alain Delon and Luis Buñuel) to help me visualize an appealing scenario in a timely manner, I decided to try it three more times. And I turned to Mark’s catalog for inspiration.

The first two that came to mind pretty much wrote themselves, when I thought about the circumstances of how I came to discover Shocking Videos. I had flown to Texas hearing about Italian crime director Fernando Di Leo by my friend, who had grown up watching his movies, and was being assured that he’d show me some of his favorites when we got back. Unbeknownst to us before flying out there, Quentin Tarantino wound up playing three Fernando Di Leo movies at his ten-day festival: The Italian Connection (1972), Slaughter Hotel (1971), and Loaded Guns (1975). And while the first title we saw was far and away the best of them, the second one, which featured Klaus Kinski, is partly to thank for getting the little mouse to start spinning round in my head, as I remembered listening to Di Leo express his disappointment with the film (his first giallo thriller) on Media Blasters’ DVD shortly after its initial release, in 2004. It was his dissatisfaction that led me to imagine what I would have enjoyed seeing him do on a second try with the genre.

So, I borrowed the two earliest sensationalist titles from my youth (Bruce Lee Superdragon (1975) and Summertime Killer (1973), imagined him combining his mastery of the gangster picture with the murder-mystery subgenre, and from this arose what was to become the first incarnation of The Superkiller (details on my first illustrated screenplay should be surfacing soon).

My second miniature was inspired by the title of Fernando Di Leo’s 1980 thriller: Vacation for a Massacre. And once I placed Klaus Kinski as my model for the leading character in Vampire for the Massacre, one director immediately sprung to mind. And it was the combination of the two of them working together—how they would have treated one another is anyone’s guess—that lead to what I believe is the one that captured the spirit of a Shocking Videos review better than its predecessor and the third that followed.

Here’s to you, Mark. 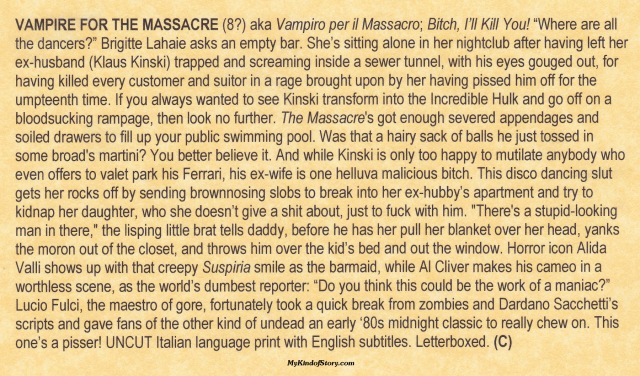 I recall being in a Hialeah movie theater as a kid, when I saw the trailer for Knights of the City (1986). And while it was not the first time I had seen dramatically-lit, steam-billowing city streets in a movie, it created a lasting impression. (Just recently did I find out its title, having only remembered the ambiance and a few of the images.) So when I began to study films, in my early-twenties, I sought out titles with similar moods and tones. And this led me inevitably to the Italian genre filmmakers of the 60s, 70s and 80s.

While I eventually developed an appreciation for The Beyond (1981), which was my first exposure to director Lucio Fulci’s filmography, Don’t Torture a Duckling (1972), Zombie (1979), and New York Ripper (1982) immediately became and remain some of my favorites of the genre (I also love Dario Argento’s Inferno (1980). Fulci (and Dardano Sacchetti) knew a thing or two about creating a nightmarish atmosphere, especially when it involved buckets of blood which a story with a title like Vampire for the Massacre would benefit from containing. And while Fulci’s later and gorier pictures involved more and more dream logic, I don’t think this idea would be such a bad thing to inject into Vampire’s presentation if thought out thoroughly enough.

But I’ve decided not to develop this story any further. Instead I thought it would be fun to offer the idea to anyone who writes, paints, or makes films in exchange for the simple pleasure of seeing it. And I plan to offer more of these scenarios in the immediate future—I’ve already got three in mind. I’m going to be tied up for at least the next three years with three other projects, presently on my itinerary, as well as a fourth project and screenplay, which is based upon my third Shocking Videos-inspired miniature (it’s a little something for the director of Shock Corridor (1963).

I believe that the horror genre still has great potential for conveying ideas and stimulating socially-relevant conversations, which doesn’t necessarily call for preachy or unexciting storytelling. Wicked or evil deeds sometimes assist in measuring the value of what is good, due to what can be lost, which may otherwise be taken for granted. And like the best that art has to offer, a good story, regardless of genre, also has the capacity to provoke the imagination towards the taking of actions which may never have been considered.

As technically faulty or as vulgar and silly as many of these genre pictures can be, I’ve always been fascinated by the attempts to do something extraordinary. You’d be surprised how many times someone had a great idea, yet didn’t fully realize it, only to then grow into something of value much later in someone’s else hands.

Below are a few elements, for mood and atmosphere, which I hope can stimulate all interested parties.

Find and go with what works best for you. And take the idea wherever you would like it to go. But above all else, have fun with it. Good luck, and don’t forget to share.